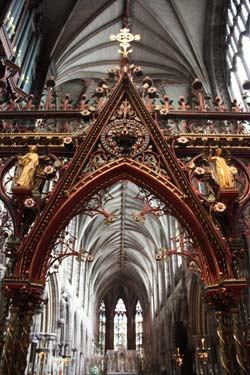 Music has been part of the daily worship in Lichfield Cathedral from very early times and the present Choral Foundation can be traced back at least as far as 1315. Today, the choir consists of eighteen boy choristers, nine Lay Vicars Choral, and three Choral Scholars. The choir is trained and directed by the Organist and Master of the Choristers aided by the Assistant Organists.

The primary purpose of the choir is to lead the music for the opus dei, the daily worship in the Cathedral. During school term time, the choir usually sings seven services each week: Choral Evensong each day except Wednesday, which is the Choir's one day off, and the Eucharist on Sunday mornings. The Choir also gives occasional concerts and recitals, makes regular broadcasts (both on television and radio) and commercial recordings.

The Choir's repertoire embraces the whole span of church music, from Gregorian Chant to the present day, and includes some anthems and settings written specifically for it.

This web site contains information about every aspect of the Choir, and is a work in progress reflecting the continuous evolution and development of the Choral Foundation. There are details about the organ and its history, and records of many aspects of the choir's seven century life. However, the site is in no way endorsed by the Cathedral and, at the Dean and Chapter's request, its content must be regarded as unofficial.

Throughout the centuries, people have given and continue to give to support the Cathedral's choral foundation. On St Chad's Day every year, the Cathedral's benefactors are commemorated, and the following is a chronologically ordered list of the people who are recorded as having contributed to different aspects of the foundation: